J1234 was one of the original batch of 40 locomotives built by North British, arrived in New Zealand in 1940. 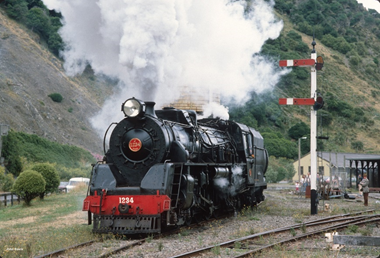 The J class locomotives were designed and built concurrently with the Ka class. Because the NZR design office and workshops were fully committed with the Ka's the design and construction of the J's was put in the hands of the North British Locomotive Company. Although incorporating many standard NZR components and fittings, the basic design is pure North British. Having steel cylinders with streamlined steam and exhaust passages, North British style thick bar frames, roller bearing axleboxes throughout, American Baker valve gear and all steel fireboxes, they were to prove to be a very free running and generally trouble free locomotive capable of further refinement in later years. They were intended to provide more powerful locomotives for use on those routes laid with lighter track that would not carry the much heavier Ka class. They thus, somewhat unjustly, became known by some steam aficionados as branch line engines.

J1234 was one of the original batch of 40 locomotives built by North British, arrived in New Zealand in 1940, having managed to escape the attention of German submarines, and was allocated to Dunedin locomotive depot in the South Island. As originally built it was clothed in a streamlined casing in accordance with the custom of the time, and fitted with two single stage air compressors mounted in front of the cylinders.

J1234 initially worked mainly on the steeply graded section of the South Island Main Trunk between Dunedin and Oamaru and was used on everything from freight to express passenger trains.

J1234 hauling the annual Daffodil train in the Wairarapa. 1986

In December 1950 the locomotive was transferred to the North Island to Taumarunui. The following year it was moved to Palmerston North and in 1963 returned to Dunedin, this time crossing Cook Strait on the new rail ferry Aramoana. It stayed at Dunedin until written off in November 1971.

The locomotive saw its share of railfan trips in the closing years of steam on NZR. In February 1963 it hauled an excursion from Palmerston North to Waipukurau and return, organized by the Wellington Branch of the New Zealand Railway and Locomotive Society, before returning to Dunedin. In November 1969 it ran from Dunedin to Clinton on an excursion organized by the Otago Branch of the same society. On the last day of scheduled steam operations in the country it double headed with Ja1250 on an excursion from Dunedin to Palmerston and back. During this trip funds were raised to assist with the preservation of Ja1274, the last steam locomotive built by NZR, and now housed in the Early Settlers Museum in Dunedin.

Soon afterwards J1234 was purchased by Steam Incorporated and between then and May 1974 it slowly worked its way, by means of railfan excursions, to Steam Inc's new depot at Paekakariki.

Because the locomotive had been purchased in working order no major restoration work was required and it was operated at The Engine Shed several times a year on special "live steam" days to help in fund raising for the relatively new society. On other occasions the locomotive was filmed in steam for spots in television programmes. One memorable evening in the early 1980's saw it running in steam on the main line at Paekakariki station when a station scene was required. Possibly the first occasion when a large preserved steam locomotive got out of its stable and on to NZR tracks.

In February 1992, together with Ka945, Ja1250, Da1431 and F163, it hauled passenger trains operated in connection with the 2nd BP Pan Pacific Car Rally at Palmerston North. Since this was the first time since preservation that the locomotive was to be used on main line excursions it was deemed necessary to carry out certain mechanical repairs before it could run. This entailed removing all the boiler cladding to inspect the exterior of the boiler, opening up all the axleboxes on the tender and engine trucks and the cannon boxes on the driving wheels to inspect the roller bearings, refurbishing the spark arrester and ashpan, and replacing the ring brasses on the side and connecting rods. The locomotive was thus towed up to the NZR diesel depot at Palmerston North where the drop pit was used to remove the driving wheel sets. After bearing inspection the wheels were replaced and it then returned to Paekakariki where the rest of the work was carried out.

The locomotive was subsequently used on a number of excursions in the North Island venturing as far afield as Gisborne and New Plymouth. In November 1993, together with several of Steam Inc's vintage carriages, it sailed across Cook Strait on the interisland ferry destined to haul a charter excursion from Greymouth to Otira and return. After this operation the locomotive steamed back from Christchurch to Picton, not only with its carriages, but also had in tow a Craven 45 ton steam breakdown crane, locomotive Ab608 (both destined for restoration at Paekakariki), and an assortment of wagons containing coal and other support equipment. Had it not been for the hindrance of the rather clinkery Island Block coal, J1234 would probably have succeeded in taking it's entire train unaided up the final 1 in 45 grade to the summit at Elevation just south of Picton. Some assistance, unfortunately, had to be called on from the accompanying diesel loco for the last few hundred yards.

Before returning across the Straits an excursion was run from Picton to Kaikoura and back that turned in to a trial of endurance for the train crews. Very high rainfall and the consequent slips and washouts caused considerable delay to the return journey.

J1234 has always been a very popular locomotive with the railfans and is a very competent performer on the main line. Like most of the J and Ja classes it steams very freely and has that typical ability to whip a train in to frantic activity when accelerating away from a stop.

Due to lack of space at The Engine Shed, J1234 was leased to the Glenbrook Vintage Railway some years ago and was occasionally operated on that line. After being out of use for several years and requiring some restorative work it was towed back to Paekakariki in 2015.  Currently stored.