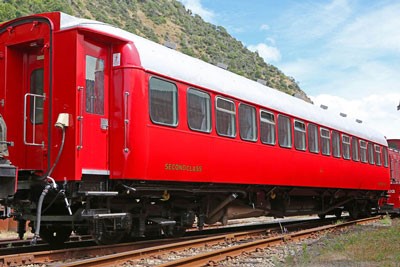 It was built at the Otahuhu Workshops in 1938. Originally built as a 2nd class car for North Island express train service and allocated to Wellington.

By 1981 it was allocated to Auckland for suburban service as A56156. In early 1988 it was refurbished at the Addington Railway Workshops for the new Kiwi Lager Ski Express venture. This was a weekend winter service from Auckland to Ohakune that ran for 2 seasons. For this it was painted in a dark green and white scheme with Kiwi Lager, Radio Hauraki and Ski Express logos. It continued in charter service after the ski train finished running.

In 1992 it was renumbered to A2317 and by August 1992 it had been repainted in the dark blue scheme with yellow waistband. In August 1993 it was temporarily assigned to the South Island to replace the cars damaged in the Rolleston level crossing smash. In 1996 it was renumbered back to A56156.

It arrived at Paekakariki by rail on Sunday 30th June 2013. Received main line certification at the start of March 2015 and ran its first trip for Steam Incorporated on the Mangaweka Express on 7th March 2015.

A new feature for Steam Inc cars is that it is fitted with table seating which is proving very popular with our guests.

A1902 in KiwiRail charter service.