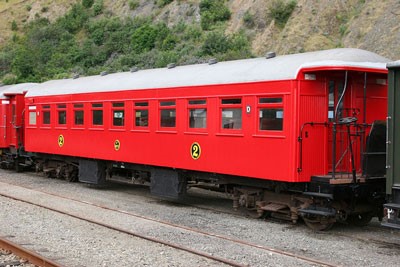 Aa 1071, a 50 foot open platform wooden carriage was built at the Petone Workshops in October 1909, as a second class, centre-lavatory, non-smoker with steel underframe and electric lighting. Most of the timber used in the body was kauri. The exterior paint colour was "Pullman Green", with chrome yellow lining.

In 1917 Aa1071 had suburban running rights between Te Aro and Upper Hutt, and also between Auckland and Onehunga, Papatoetoe and Henderson.

A double lavatory and steam heating were fitted in 1925. In July 1932, Aa1071 was allocated to Thorndon for use as a Main Trunk second class car. It was transferred to Auckland in May 1935, and in April 1941 had its original seats replaced with Scarrett type seats.

At the Otahuhu Workshops in September 1950, Aa1071 was altered to a second class suburban car with 51 seats and an end lavatory. It continued to work in the Auckland district. In 1967 its ends were strengthened.

In 1973 Aa1071 was operating in the Taumarunui-Stratford area, and was reported to be in good running order.

Back in Auckland Aa1071 was listed for condemning in November 1976. It was saved from destruction when it was bought by Steam Incorporated, and it arrived at Paekakariki on 30th may 1977. After extensive renovation work it was eventually returned to main line excursion duties.

Steam Incorporated is indebted to Juliet Scoble for this information.