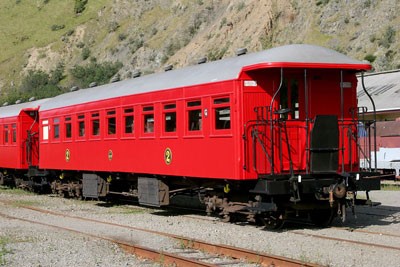 Aa1073 is a classic example of the priorities considered when selecting disused vehicles for preservation when a railway restoration society is in the early years of its existence. New Zealand passenger cars built during the 1900's were fitted with very attractive, and now irreplaceable, pressed sheet metal ceiling panels. Over the years, as they became damaged, most were replaced by other more plain materials. When Steam Inc was building up its excursion fleet Aa1073 had been withdrawn from service and was residing in a siding in Auckland awaiting its fate. In the course of selecting cars for preservation this vehicle was chosen because of its complete decorative ceiling, and polished copper light fittings. At that time rotted body framing, corroded under frames, ancient draw gear and possible bent bogies were not accorded a very high priority or more probably not even considered ! Because of this Aa1073 is, internally, the most original looking of the Steam Inc fleet and is much admired by rail fans and the general public.

When new, the vehicle was assigned to the Auckland district for Main Trunk duties and ran between Auckland and Wellington until returning to the Petone Workshops for a general overhaul in 1926 when similar work to that done on Aa1030 was carried out.

In 1934 the car was demoted from the Main Trunk and sent to the Wanganui district where it remained until 1960. In that year it went back to Auckland but was now allocated to Suburban work until withdrawn in 1976.

After purchase by Steam Inc, it arrived at Paekakariki in July 1977, was fully restored and ran on its first excursion in November 1979.

Although there may not be a great deal of the original vehicle structure remaining, overall Aa1073 presents a very genuine impression of the typical long distance passenger car of the early 1900's.