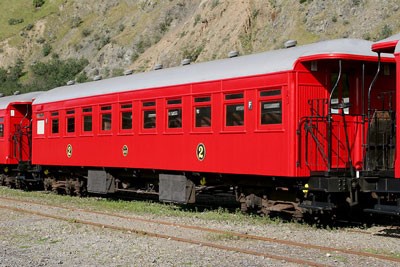 This carriage started life at the Newmarket Workshops in Auckland as a two compartment second class Main Trunk coach with centre toilet and seats for 44 passengers. It was assigned to the Wellington district and ran in this form on Main Trunk service for twenty five years without any record of alteration or mechanical modification.

In March 1937 the centre toilet was modified and the seating increased to 46. In 1939 it was sent to the Hutt Workshops where the interior was rebuilt as a composite first and second class with 16 and 23 seats respectively. In October 1942 it was fitted with the new type 25330 "Timken" roller bearing bogies.

By 1944 there were sufficient of the new steel clad 56 foot cars available for the principal long distance services and Aa1267 began its downgrading for suburban services. In August 1944 it re-appeared from the workshops re-fitted as a single compartment second class car with 51 seats and a single toilet at one end. In February 1948 the roller bearing bogies were removed and replaced with the original type of plain bearing bogie. In this form the carriage continued in use for a further 30 years as a suburban carriage in the Wellington area.

In the early 1970's Aa1267 was transferred to Napier to work on the Hawke's Bay mixed trains until finally withdrawn from service in mid-September 1976. By the October it had been consigned to Marton for scrapping.

The car was formally acquired by Steam Incorporated in December 1976, being the first passenger carriage owned by the society.

The vehicle was in remarkably good condition for it's 64 years of age and still retained the original pressed metal ceiling lining so typical of an earlier age. Despite it's good appearance the car was completely rebuilt by society members and entered excursion service in July 1980. In 1985 the plain bearing bogies were replaced with X25140 SKF roller bearing bogies as part of the society's upgrading programme for main line certified cars. By the early 1990's the majority of cars being run by NZR, and later by Tranz Rail, had been repainted in a variety of colour schemes and Steam Incorporated decided that the time had come to restore it's fleet to the authentic NZR Crimson Lake red. Aa1267 was the first Steam Inc car to be repainted in this colour and is now our premier excursion carriage.