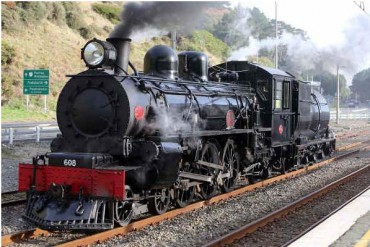 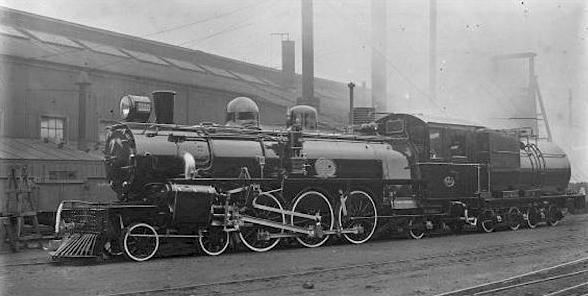 First of a Large Line

The AB Class was a New Zealand designed class of locomotives, a development of the earlier A Class 4-6-2 engines also developed here. The AB class improved upon the A’s by having superheated boilers (where the steam is heated to higher temperatures, making it more efficient) compared to the saturated boilers and compounding (double use of steam) arrangement on the A class. AB 608, entering service in October 1915, was used in a series of benchmark trials against A class members in 1916 – with AB 608 coming out on top. In total, 153 AB engines were built – 143 built by NZR Addington, A & G Price of Thames, and the North British Locomotive Company of Glasgow, Scotland; and 10 more were rebuilt into AB class engines from the WAB class, a tank engine derivative of the AB. 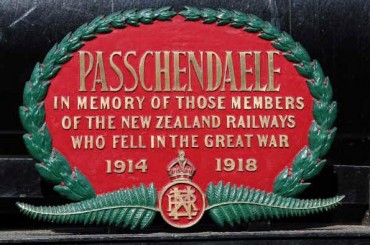 In 1925, New Zealand Railways wished to exhibit AB608 at the South Seas Exhibition in Dunedin, alongside the historic Double Fairlie engine built in 1872.

It was felt AB 608 should have a name if to be displayed alongside “Josephine” – the Minister of Railways, Gordon Coates agreed that the engine could be named in memoriam for the more than 5000 railwaymen that served in World War One. After rejecting the names “Somme”, “Le Quesnoy” and “Ypres”, “Passchendaele” was selected. Two plaques bearing the name “Passchendaele” were cast and affixed to the sides of the locomotive. NZ Railways had not named locomotives since the 1870’s, and AB 608 was the largest, and last, locomotive to be given a name by them.

An Engine for Special Occasions

In addition to being exhibited at the South Seas Exhibition in Dunedin in 1925-26, AB 608 was used on a number of special trains – including Royal Tours, hauling the Prince of Wales around the South Island in 1920 (prior to being named) and the Duke and Duchess of York in 1927.

Ab 608, Passchendaele, on display at New Zealand Railways' centennial celebrations in Christchurch in 1963.

It was also the lead loco on the official train from Christchurch to Arthur’s Pass for the opening of the 8.5km long Otira Tunnel in August 1923 – a feat of engineering which was the longest tunnel in the British Empire at the time.

“Passchendaele” plaques as due to wartime pressures, they could not keep the locomotive in a state clean enough to do justice to the engines status as a war memorial. These two plaques were then placed on display at Christchurch and Dunedin Stations respectively, where they can still be seen (the Christchurch plaque having moved to the new Christchurch station). In 1963, to commemorate the Centenary of Railways in New Zealand, AB 608 was chosen to represent its class in a display at Christchurch Railway Station and replica “Passchendaele” plates were cast and affixed to the locomotive’s sides. Painted up to exhibition standard, after the display the locomotive returned to general service in plan black but kept the plates. In 1967, due to boiler issues AB 608 was withdrawn from service.

Following AB 608’s withdrawal in 1967, in recognition of the engines historical significance

it was donated to the New Zealand Railway & Locomotive Society and moved from Dunedin to Linwood Locomotive Depot in Christchurch for interim storage. Here the engine, and some other large engines were stored until it was possible for them to be moved to the Ferrymead Historic Park in Christchurch for display, a move that was performed in 1978. AB 608 remained on display at Ferrymead, however there was no plans to restore the locomotive to working order there. In 1991, Steam Incorporated approached the New Zealand Railway & Locomotive Society to see if they might be willing to lease the engine to Steam Inc for restoration and main line running. Following the signing of a lease agreement, Ab 608 was moved north to Paekakariki in 1993 – the first time AB 608 had been to the North Island.

Although the engine arrived at Paekakariki in 1993, work on restoring the locomotive did not begin until 1997 following the completion of JA 1271. 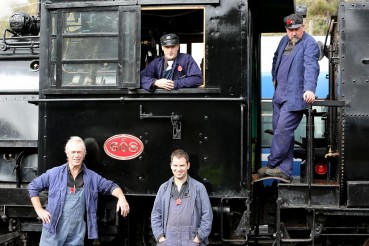 After dismantling and assessment, it was found the locomotive overall was in poorer condition than had been thought, and due to tough financial times hitting the society due to it being nearly impossible to run on the main line the restoration ebbed. However things did pick up again, and by the early 2000’s it had been decided a brand new tender body needed to be constructed as the original was too worn to fix. The boiler has required extensive surgery, and there have been a lot of items on the locomotive which have either been extensively rebuilt or in some cases, have had to be made new due to the poor condition of the originals or because the original items were missing when the locomotive arrived at Paekakariki. The locomotive has been restored to very high standards and was completed in 2014.  Excluding volunteer time the restoration cost in excess of $500,000.  Since being restored the loco has travelled to Auckland, Napier and New Plymouth plus most of the South Island.  It has also participated in several WWI 100 year memorial events. 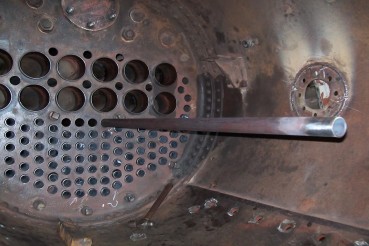 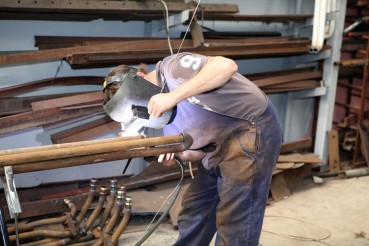 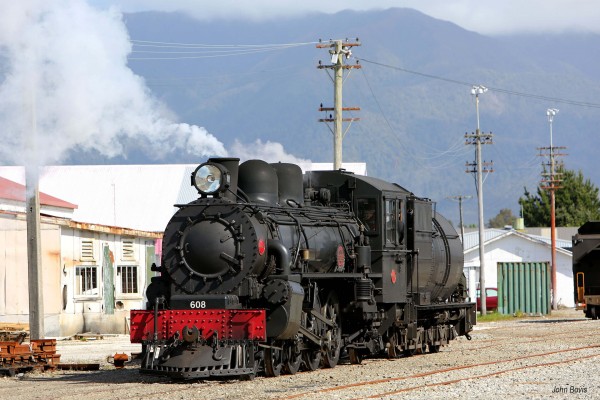