The oldest carriage in the Steam Incorporated fleet. 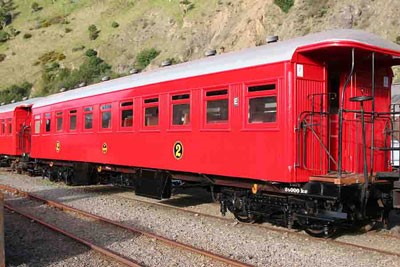 Aa1030 is the oldest carriage in the Steam Incorporated fleet and the oldest North Island wide bodied car in New Zealand that has been totally restored for main line excursion running. When originally built, it was one of a batch of twenty one vehicles of entirely new and modern design ordered in 1908 for use on the soon-to-be-completed North Island Main Trunk line. They had an all-steel underframe, windows a foot wider than anything then running, toilet facilities in a center compartment, and gas lighting. This was very modern equipment for the soon to be introduced express passenger service over the 685km between Wellington and Auckland.

Little is known of the carriage's early history, but presumably it ran countless thousands of miles up and down the North Island until 1924 when it received a number of modifications in the Petone workshops. Returned to service in the October it had modernised toilets, electric lighting, two extra seats, and the then newly devised anti-collision steel framing at each end intended to prevent telescoping in the event of an accident. In 1930 a newer design of bogie was fitted, with a longer wheelbase and improved ride characteristic, but still with plain axlebox bearings.

In this form the carriage continued in Main Trunk and Provincial passenger service up to the mid 1940's. By this time there were sufficient of the 56 foot steel carriage stock (built from the early 1930's) for use on the inter-city trains and Aa1030 was down graded for suburban use. After further modification, the carriage returned to service with a single 51 seat passenger compartment and a single toilet at one end and ran in this form for a further thirty years.

Although officially withdrawn in August 1977, in reality the vehicle had been out of use for several years and when purchased by Steam Incorporated in October that year was in a very run down and decrepit state; all the windows were smashed, seats were missing or vandalized and overall the vehicle was derelict, but in towable condition.

Restoration of the vehicle commenced in the Spring of 1980 with the separation of the body and underframe. The body received considerable rebuilding of the framing, new window assemblies, new outside cladding and a new canvas roof covering.

The underframe received new ends recovered from another vehicle, the original continuous rod and coil spring drawgear was replaced with modern Janney Yoke drawgear with rubber spring packs, and the plain bearing bogies were completely overhauled.

By February 1981 the body and underframe were re-united and the interior work of fitting new paneling, new ceiling linings and refurbished seats commenced. Finally the outside was finished off in the then standard Steam Inc livery of Chocolate Brown with yellow lining. In this form Aa1030 returned to the main line and has run many thousands of trouble-free miles on excursions and charters.

In later years the composite steel and wood bogie bolsters were replaced by the all steel variety and the plain bearing 'Delux' bogies, dating from 1930, have been replaced with completely overhauled and more modern roller bearing bogies.